Defend or Defy this #realfake

This is pretty funny. The internet is trying to show you how to create the $1,090 Balenciaga Defender sneaker on the cheap. They suggest that you get a bike tire and glue it to a pair of ASICS. I know from practice, its hard enough to get the sole of a Jordan to re-stick even with Gorilla or Super glue. So, good luck with this. And if you can walk without twisting an ankle be sure to let us know in the comments section. What do you think of this #realfake DIY project?

See you on the Streetz…

The Iconic KITH store opened up on Friday August 20, 2021 on Oahu. Located between the Apple store and Jimmy Choo on Kalakaua Ave. I stopped by for a few quick snaps of the store. And made an ill-fated attempt to get in to the store.

For their Grand-Opening they released a KITH colored bright light blue and white Air Force1 with the Hawaiian Islands featured on the tongue. They did tickets, wristbands and general standing in line to get the kicks. Saw some of the AF1’s re-selling for $700-$900.

The Store has clothes and shoes on the main road and a KITH treats shop a bit inside The Royal Hawaiian Shopping Center.

If you got lucky enough to purchase a pair of the limited release AF1. Congrats! Maybe I’ll see you down there one day in a few weeks or months. See you on the Streetz…blog!

Rick Owens Goes for the Goth

On the search for some good Olympic content centering around clothes, kicks, and headphones, I ran into a collab I somehow missed coming our way. The shoes appeared in my IG Live feed late last night/this morning. Releasing all day today 7/27/21. They’re already sold out on line, have some in store in Amsterdam and Italy. And at some good pricing on Stock X as of 8pm Tonight. I’m thinking pricing on these will go down a bit in the beginning, but in about a year should double. Since they’re sold out on the Converse site and the Rick Owens EU site. They should increase in price, but may be a good deal for the next few weeks.

When it comes to Rick Owens Collabs, they are kinda pricey but not nearly as pricey as the Rick Owens main line. So re-sale should stay around retail plus $30 for a bit. Then over time, the price will increase. The RO x Doc Martins are still within $30-$50 of retail, but there are some very nice replicants out there, so be careful when purchasing the Doc x RO collab.The shoe that pretty much kicked off the latest 10 years of Streetwear is the Iconic Rick Owens Ramones. It is basically an oversized Black + White Converse shoe. Made with exquisite Italian Calf-Skin leather with a crisp cool stainless steel zipper. Yes, it looked a bit weird when it first hit. But, quickly became the go to staple of the high-end 2011-2015 streetwear scene. I took a picture wearing a pair in the Barneys store back in 2012. You can see it here. Or same pic is below:

Since the Ramone was a blatant take on the OG Black and White Converse All-Star, it’s kinda perfect that this collab brings us full circle. Rick making Dough for Converse. Converse making cheddar for Rick Owens. A bit Bizarre. Yet it’s happened … Today.

And little did we know, these were the exact same shoes as seen in the Rick Owens Runway show that the streetzblog reviewed here Just 5 months ago. I’m thinking Rick’s been listening to some Good Goth or Industrial Dance lately. These are more Goth than the Air Jordan x CDG @ DSM Collab and those were pretty Goth/S&M/Bondage themed.

Shown below are the Converse x Rick Owens TURBODRK Chuck 70’s. They come in Hi-Top BlK and Low’s in WHT. Both with stacked sole and oversized tongue.

What do you think of them? Do you want a pair? Or are you going take a pass and wait for the next RO collab..we know we will get it sooner than later. Pretty sure they are already working on another RO x Converse iteration. BTW: There used to be some really DOPE Adidas x Rick Owens kicks at the RO store in Soho, NY. I know I should have bought a pair, but were about $300 8 years ago and that was just a bit too high at the time.

What do you think? Turbo DRIP? Turbo Dunk? Turbo DRK? or Turbo Dork? Let us know in the comments section and LMK if you see any cool threads or kicks in or around the Olympics.

2021 is the year of the Jordan 1 and any kind of Dunk you can obtain. Cutting through the clutter of everything else are these. The USPS Priority Mail shipping box themed Air Force 1’s. I see this shoe floating in and out of my various social and web feeds and still dont know if it’s a real drop or not. But, it’s a Friday. So on Fun Time Friday for April 9, 2021. Lets have a look-see at these interesting kicks.

I do like the boxes that they are influenced by. You can stuff as much things as you like for one low price.The shoes like the boxes are white red and blue. The back of the show is probably the most interesting, which includes an area to sharpie up the “From” section. I suspect you could put your own name, Jordan would look dope or something even more expletive could get you some compliments or condemnations.

Would be kinda cool if they gave away some of these to Postal workers. Their standard show seems to be the All black New Balance Bland.

Have a Nice Weekend and See you on the Streetz…blog!

Y-3 is the Only Brand You Need

If I could choose only one brand it would be Y-3.  It can be worn at an upscale event, brunch, a Sporting event, on the streetz or even for lounging around the crib on a Sunday afternoon. Usual colors are Black + White and even when other colors are positioned in, they tend to look pretty nice.

The clothes are always made with superior high quality.  Every pair of Y-3 pants I own are sturdy, solid and clean. I can actually feel the high standard of tailorshp that goes into them, when I wear them.

Although they can run a tad big at times. I do own a piece or 2 that are a bit big. If you get a chance, try them on.  Pro Tip:  SSENSE tends to have the best on-line sales.  And Bloomingdale’s  is the place to go for selection, quantity and to try the goods on for your fit. You may need to size down 1-2 sizes dependent on the year the Y-3 clothes are from.  For this show they did run a tad Big.  You can also catch Y-3 on the Adidas site, where you will find a pretty decent array of clothing and All of this season’s shoes.

We had a teaser of them at the Fall/Winter 2019 Runway Show: 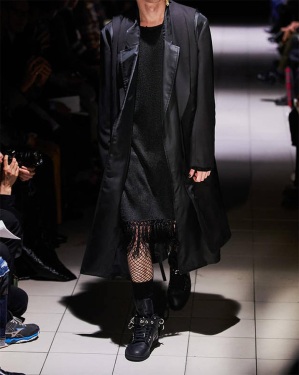 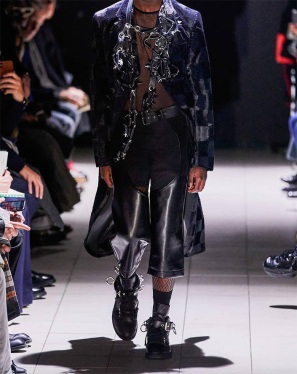 And here they are in the 2 colorways. As you can tell, we’re a bit more of a fan of the Black version.  (Pix Courtesy of DSMNY).  The CDG Homme Plus x AIR Jordan 1 High. 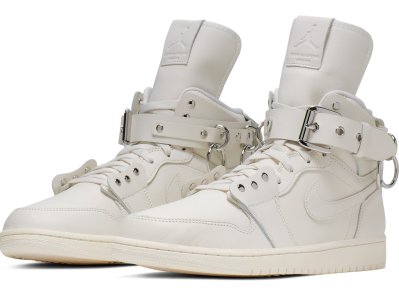 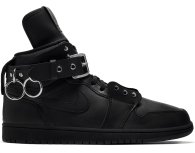 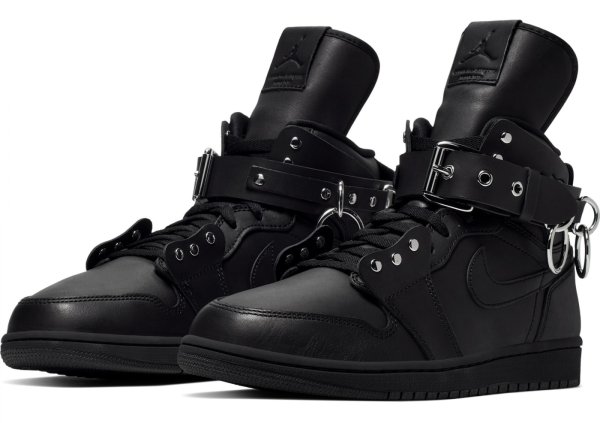 Check out the Runway show here:

Like some Kicks to go with your nuts?  Planters has you covered. Check out the Limited Edition Crunch Force 1’s available on June 21st here. They are made with Royal Blue and Yellow Tumbled cowhide with Black Suede. The back features the word PLANTERS, the soles are peanut color and the inside’s are actually pretty nice with some Peanut graphics. Here’s a nice look at the inner Soles: If you like your Nuts with your Kicks, better hurry on over to their pop-up website to secure your pair.  Retail at $170 and look like they are almost all Sold Out!

What do you think of the Sneaks?  I suspect you would wanna pair if you are a P1/Super Fan of the Peanut brand.  Or maybe they will re-sell for some $$.  Me, I think I’ll pass on them. Not quite my favorite color-way.  Although, I do like the inner soles.

See you on the Streetz…Blog!

The designer of the oh so famous Balenciaga Triple S kicks is the mastermind behind these New Funky, Chunky, Post Space-Age Kicks-53045. They feature a pretty cushy looking bouncy sole and come in eye popping colors including Popsicle Blue (Ice), Bright Orange Blast (Flame), Blacked out Black (Black) and White (White). With a Highlighter Yellow (Acid) color coming soon as mentioned on their IG.

French Designer, David Tourniaire-Beauciel has lots of good things to say about the kicks. They are Like slippers, and similar to walking on pillows. They do look pretty comfy from the computer. Would like to try a pair on to see how they feel. So far, you can get them on-line at SHOES53045. If you have a chance to wear them, let us know how they look/feel in the comments section. See  you on the Streetz!

Reebok scares up some new Kicks

I’ll click on any video or ad showing street basketball and usually they hoop it up. This Reebok ad doesn’t have any Dazzling Dunks, Fancy Dribbles or Behind the back Passes.  It’s actually…a little Scary.  Would have been a good ad to save for late October.

It promotes the 90’s inspired Aztrek Double kicks. But beware before watching the ad, it might bring back memories of the Ring-(See video below the Reebok Vid). Or maybe some 90’s horror themed Anime?

Take a look at the video. Let us know what you think of the ad or the shoes in the comment section.  What I came to see is it’s the first time, I’ve had Reebok on the Streetzblog. So Maybe, the ad did its job, got us talking about them.  Hasn’t been since Iverson that I’ve worn Reebok.  BTW:  They recently released some glow in the dark Iverson’s classic kicks, saw them on twitter.  Maybe it’s time for a Reebok-Come back in 2019?
Super Scary Scene from the Ring 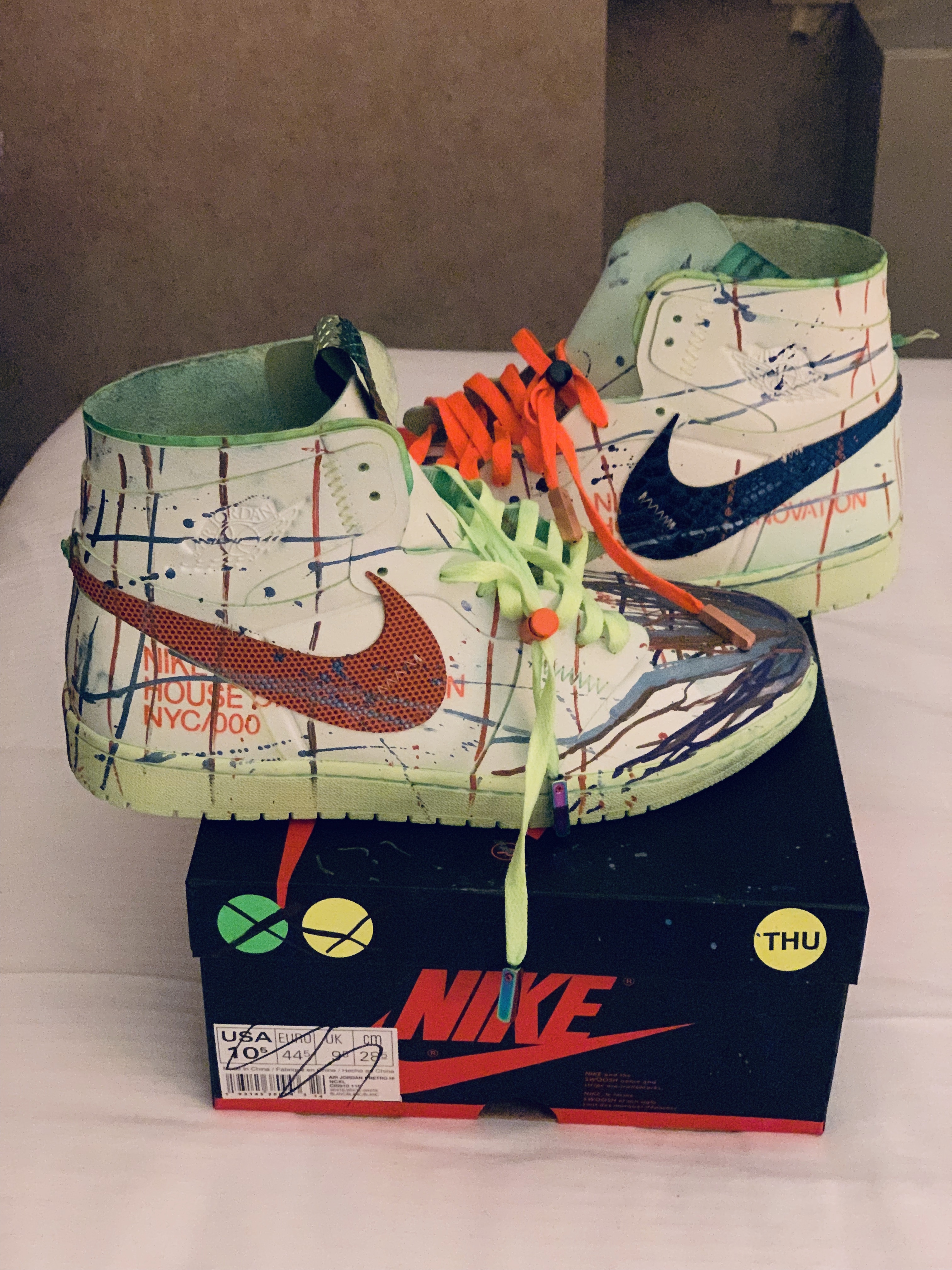 Two Days ago Nike Double Dip dyed these Jordan 1’s in Day-Glo Green Paint. They also added the imprint I chose in the orange paint 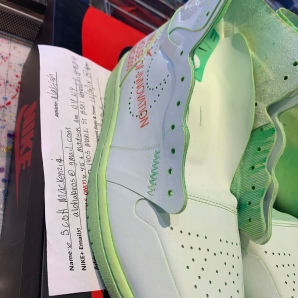 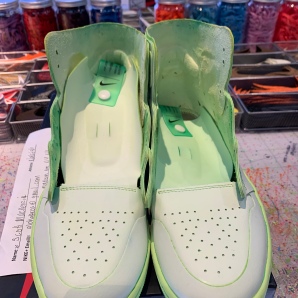 Today, we got together in a group of about 12 and Customized our Jordans. Starting with the Swoosh. I chose Blue Alligator and Brownish-orange leatherbasketball material 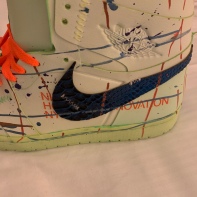 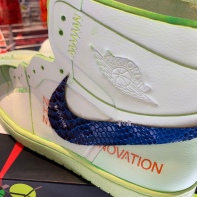 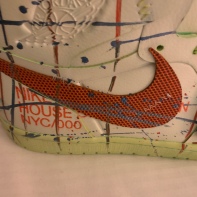 Then came paint via acrylic markers. I will most likely tweak this portion a bit at a later date. We had about 2 hours to do everything. Like sewing and design class I was last to go home 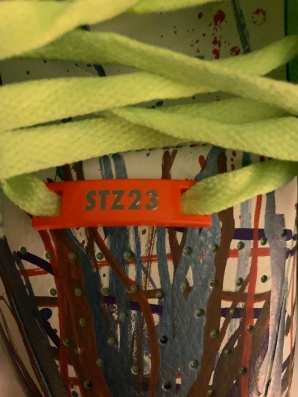 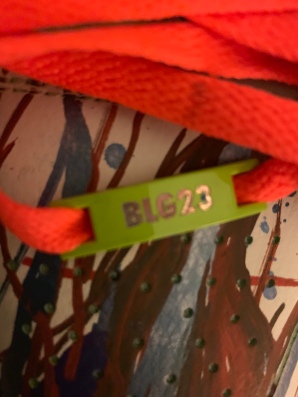 Laces, Toggle, top flap and Lace tips are chosen. Many, many different colors to choose from.  Here is the finished product. This to me was a $2,000 experience for a mere $200.  And they are Air Jordans! Cannot believe my luck that this week was the AJ1 week. Next week is the Cortez, then the AF1. This Nike NYC store is  a very incredible special place. Mahalo to Nariah and the crew for all the great help and supplies. My hands, shoes, jacket, even my face is colored in blue and orange! 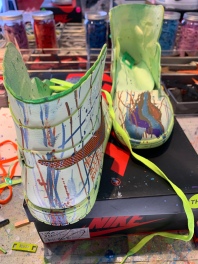 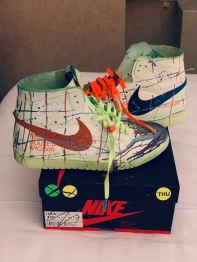 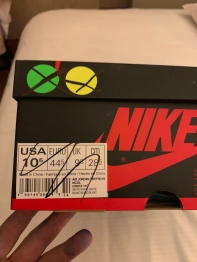 See you on the Streetz…of New York!