Whew! This was probably the most intense week of my life. Went to work from 830AM until 1230PM then to School from 100PM until 8PM then did homework. Did it! The thing I missed the most was Streetzblog.com and going to the gym. All finished now and it’s time for some quick catching up. Here’s some of the HOT kicks you can wear or try to find for Halloween. Enjoy!

Too much White for me-Whatcha' thinK

On the left:  Nike Orange Black and White’s.  A bit too much white on these for me.

On the Right are my favorite Halloween shoes, One side is Black with and Orange stripe and on the other they are orange with a black swoosh.  These can be seen on pickyourshoes.com  but have been sold out for 2 years. I could have gotten a pair, but was being frugal the year they came out..aaah what a bummer! 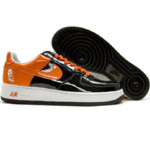 These are my totally number one FAVES!

WHAT ARE YOUR FAVORITE HALLOWEEN KICKS?

LMK ON THE COMMENT SECTION OR LEAVE A VOTE ON WHAT YOU SEE ON THIS BLOG  AND I’LL TALLY THEM UP AND ANNOUNCE THE WINNER ON HALLOWEEN!

I do have a pair of these, not sure why? LOL

Now I do own a pair of these black, white, brown Nike Blazers. They have some interesting creepy etchings on them, but when I wear them, no one seem to notice them, so not my favorite Halloween shoes, plus like most of my Nike’s they hurt the bottoms of my feet. But at the time I bought them, I must have seen something cool in them. I actually think I bought them the year I found out that the Orange and Black patents were sold out and just needed to have a new pair of Halloween kicks.  I may or may not wear them this year, depends if I can even find them in my Shoe filled Condo!

These look best at the Clubs!

This pair I would have bought if I was 20 years younger and went to the clubs every night because they do work and they do glow really good. but only in the clubs. Otherwise they are just a pair of plain yellowish white Nikes and I’m not really a favorite of white Kicks.

But they do Bang pretty awesomly in the Nightclubs, much better than that silly glow in the dark hairspray that never seems to quite work.

you dont need to be in the club for them to show up. But

from what I remember they only made them for kids.Oh Well..maybe next time. And hey-Where are the Halloween Jordan’s I’ve never seen a pair of them. What is up with that! the most popular shoes in the entire World and no special colorway for Halloween..Hey come on Michael-let’s get with the Halloween Spirit! 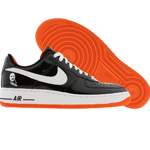 Are you getting scared yet? LOL

These look a bit similar to the Black and Orange Patents, just not much going on here. Pretty Subtle and Halloween is NOT for the Subtle. Go Big! Go Bright! Go Black! Go Bright Orange or Don’t bother going out. Stay at home bored to death because no one trick or treats art your house or condo anymore, they get much more candy free from the stores at the malls. Halloween is one night, you gotta get out of the house even if it’s not to a party or a club, it just sux to be at home alone on Halloween.

Hey-Yo! I'm a bit different than the rest. What happened?

This Pair is called the NIKE SB Blood Splatter.  And Hey-They have a completely different colorway then any other pair on this page. What a concept. You don’t always need Black, Orange and White.  For a tune to go with these-check out Fake-Blood’s “Mars” or “Blood Splashing”

Now, here’s a new pair for 2011, but as far as I can tell, I think they are only for kids. Not totally sure, but that’s what they’re saying in the blogosphere. At least its a new colorway. Not sure what light blue has to do with Halloween, but if they’re for kids, they can figure that out. Not really my style anyways. too many colors on one show. and the front’s look a bit “ortho” old man too.

Nike Airmax, well I don’t own any Airmax 95’s so I can’t really comment much on these  But to me they look like regular everyday shoes, nothing special enough to wear on Halloween or even Halloween Weekend. but I do include them because I know a lot of Europeans enjoy the Airmax 95’s and may want to get a pair of these.

OMG! I sure hope there's a Y-3 Sample Sale nearby in Hawaii

…you see a sign that says Y-3 in the Sam’s club parking lot letting people know what level and area that they jut parked in. And instead of thinking its a parking sign like most people you get real excited from the sign and  walk up close to it thinking “Wow!  Y-3 -Oh Man! I sure hope there’s a sample sale or pop-up store nearby” and seeing this sign in yellow and black, it sure doesn’t help that the Y-3 brand Uses orange and black as their brands colors.  Me being a pretty bad fashionister especially when it comes to kicks and jeans went right up to the sign and took this picture.  And “No” there was no sample sale or pop-up store nearby. Bummer.

Although one of the reasons this sign stood out to me was my good friend Rolanda in NYC was the first to let me know about sample sales years ago and the Y-3 Sale was the first REAL name brand sale That I ever attended.I loved it, real expensive clothes and kicks for extremely great prices and since I wear Large, a 40 suit and either a 9.5 or 10 size shoe, the sample sales work for me perfectly.  Even though I only wear these shoes once a year at Halloween, I just had to buy something at the Y-3 Sample sale, so I bought theses super bright Y-3’s and at the time bright orange was one of my favorite colors so it worked out well

My Y-3 super bright Orange Hi-Top kicks! Yep, They’re Bright but they’re REAL Y-3’s and that is what matters most!

The funny thing about these shoes is the box says they are for basketball-see below-I cant see anyone in this world wearing them to play basketball. they are soft suede Fashionister shoes only made for late night european style dinners and hotel  Costes After hours lounge parties. 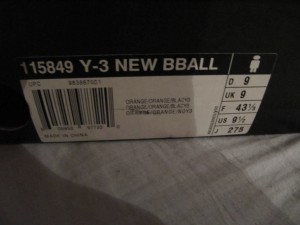 Play B-Ball in these? Hell No! These are sweet, expensive, big time designer shoes!

Note: Dictionary.reference.com defines the word:fash·ion·is·ta as:

noun
a very fashionable person, especially one who works in the fashion industry.

And I define Fashionister (Fash-Uh-Nee-Stir) as the male version of the female Fashionista.  For some reason, I couldn’t find Fashionister on Wikipedia, encyclopedia Britannica or even dictionary.reference.com.  Hey-Next week, I’ll be in Seattle for my Step Sisters Weddng. I’ll be hitting the streetz with new QR-Code Stickers and scoping out the latest fashion finds for all the fashionistas and fashionisters, street culture vultures, trendhunters, Hot trends peeps etc.  stay tuned for the Seattle Streetz blog.com  Leave a comment if you like, LMK your favorite sample sales or tips on what to do at a sale or  email me at alohabros@gmail.com or text or call me if you live in Seattle and have some cool places you think I should check out!  AlohaLatersForNow.