Kendall Jenner on her way to Oahu-Soon!

Last Blog posting, we told you about Kim Kardashian and Kanye West (The Kanyashians) being in town. Today, we found out that more Kardashians are coming to town soon. From an exclusive from Life and Style Magazine, which I found through hawaiifiveOonline.wordpress.com, Kendall Jenner is coming to town to shoot some scenes for her acting debut on CBBS’ Hawaii Five-O.

According to Life and Style, Kendall will play a sales assistant in an episode set to air in October, that means she should be in Hawaii soon. And since she is 16, at least one of her famous parents will be joining her on the trip. So we’ll be seeing Kendall Jenner and either or maybe both Bruce and Kris Jenner in town soon too!  BTW:  Hawaii Five-O should be gearing up for a mid September Sunset on the Beach.  Rumors are brewing.  We’ll bring you the details (if it does happen) soon. And two weeks ago, I forgot to tell you, but my friend bumped into Mike Brown the Head Coach of the L.A Lakers. He was staying down at the Hilton Hawaiian Village. My friend said he was really cool and he got a picture with him. That of course he forgot to send to me. I’ll admit it, most of my friends are pretty flaky.  But, most do come through, just on Hawaiian time.

More #celebsigtings by me about an hour ago, I was walking down Fort Street Mall and bumped into musician Walter French and DJ Romeo Valentine. Walter’s doing well, he’s in town to open up for the Big TYGA show next Thursday August 23rd at the blaisdell.  Hit up Romeo Valentine if you’re looking for some tix, He’ll be over at Summer Wonderland Saturday night.

This weekend, I’ll be in Chinatown on Saturday looking for fashion and kicks on the streetz.  If you’re around say “HI” and I’ll get a few snapz of you and what you’re wearing.  See you soon.  Have a Great Weekend!! 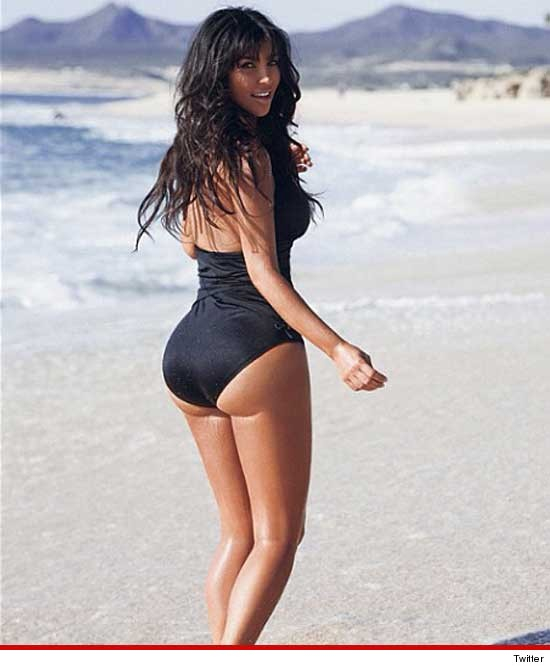 Thank You to Twiitter.com and Kim K’s tweet for this picture! It was really cool of you to let us know you are in Hawaii! How cool is that!

Kim Kardashian tweeted this picture. She say’s that she is in Hawaii on Vacation and calls this picture “Happy Sunday” After I saw it on Twitter, I asked around and my LIVE not read on the net this time sources say:  “She is currently in Hawaii with Kanye West who is busy recording and finishing up his album which is due out hopefully before December!”

Then I asked my other source and he said “Apparently ‘Two Chainz’ is also here recording tracks.  Word has it that Beyonce and Jay Z are coming to join Kanye and Kim”.

Now there is a very exclusive recording studio about 5 minutes from where my dad lives near Koko Marina in Hawaii Kai that is for sure and that is probably where they are most of the time, at least that’s where Kanye most likely is hanging. Me, I work at 6 radio stations and know 2 people who know the people that run this “studio”  but for some reason, I have yet to me invited for a tour.  I have driven by it and it is hard to find, kind of like the old Batman and Robin TV show, hidden under some trees, practically under the water in a corner with gates and high security. Maybe one day, I’ll get an invite, I’d be happy to leak a few beatz to a track if Jay-Z, Beyonce, Two Chainz or Kanye would like it?  Up to you guys?   Or I can stop by and keep everything quiet if you like, I can keep a secret 100%.  We could always talk Kicks, I bet I have almost as many as Jay-Z and Kanye, hey maybe we can trade some too.  I wear size 10 and have a pair of size 8 and size 13 Lebron firstGame kicks I’d love to trade or sell to someone.

On the subject of Celebs, a third source of mine got to check out the video shoot of the upcoming Tyga Video.  Don’t forget Tyga is coming to town next week on August 23rd, along with Walter French and Glasses Malone. Both to really nice, solid guys.  I don’t know Tyga, but suspect he’s pretty cool if he has Walter and Glasses opening up for him.  Hit up Romeo Valentine if you need some tix.  His email is:  romeov1043@yahoo.com  Let him know that streetzblog sent you and I’m sure he can hook you up with something..maybe some after party tickets..LMK what he says.

Wow, I sure got side-tracked tonight. I wanted to post up Kim then do a couple of polls. I guess I really must want to go to that Bat-Cave studio sometime.  Here’s the polls.. First is do you think Kim looks hot or not in this shot. Personally, I like her Salt, Sun and Sand waves in her hair and she looks quite happy1  Second poll is what beach is she at? We all live here and can’t figure it out.  I’ve heard everything from Sandy’s to Makaha to Kailua to Hawaii Kai.  It’s so bizarre how 20 some people who live here can’t figure it out? I don’t know either, to me it looks like a neighbor island or the North Shore. So please fill out this poll or the other or both.

BTW:  Last weekend Kim and Kanye were spotted over at Ward and also at a Starbucks somewhere on the island.  Let us know if you have a Kim, Kanye, Two Chainz, Jay-Z, Beyonce, Tyga, Walter French or Glasses Malone spotting over the next couple of weeks. Keep your eyes out, there’s not too many places to hide on Oahu. Have an Awesome rest of the week!