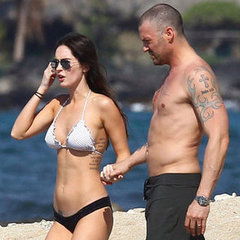 Megan Fox star of Transformers and Brian Austin Green star of the First Version of Beverly Hills 90210 visit the Big Island on February 22, 2012. The Picture is somehow from the Four Seasons Hotel on the Big Island. In the past many famous people visited there and most pictures didn’t go public. I suspect it’s getting harder to keep their privacy with everyone having a camera on their phones. I suspect they still had a good time. Kelly Ripa is on the island that I live on right now. She’s doing her show at the new Disney hotel-The Aulani out by the waterpark. So Far, she’s had Daniel Day Kim from Hawaii Five-O, some Disney actors on her show and she went diving somewhere near where I live, but I missed it due to the Big Great Aloha Run expo and Run this past weekend. Have you seen any Celebs near where you live? or in Hawaii lately? LMK *The Knicks play the Heat live on TV Thursday night and the NBA All Star weekend starts FRiday and culminated Sunday for the big game. this is one time when I don’t mind the time difference, I can watch the NBA All Star Game at about 1p then the Academy Awards at Night, no fighting going on in my household on that one! LOL