How To Make it in America Season two..Trailer #2 NEW!

About a month ago we scored the first trailer for the new season, now here’s the second trailer very HOT off the presses. The trailer is very slick, fast paced and a bit on the rated “R” tip.  Looks like Ben Epstein and Cam Calderon take a trip to Tokyo and run into their usually mishaps, fun and mischief as they do in NYC.

For now we have Entourage to watch for the rest of the Summer, anyone who likes Entourage, Fashion, Kicks and New York City will enjoy this show.  I like it, I didn’t actually expect it back because many critics didn’t like the show. And I don’t know anyone else who watches it-but that never means much.

This year Kid Cudi returns as Domingo Dean and we’ll have special appearances by Pusha T, Javier Nunez, Pharrel Williams amongst others.  Check back here on Streetzblog.com for rumours and news on the upcoming season I’m sure we’ll have them.

Special thanks to GQ and HypeBeast for the clip.  I gotta’ tell you it was hard to get on to this page, it wasnt on YouTube, so I had to send it to my other blog advertisinginhawai.com, then copy and paste it over here. Now I need to erase it from over there..or maybe I’ll just keep it on there. It’s fun to watch, why not let more people see it.

Vinnie’s got the New J’s!

These are the Converse First String Standards Dr.J Pro Leather shoes that just released this past Friday August 5th. The Shoes honor the legend of Julius “Dr. J” Erving and the shoe he made history in, Converse recreated the classic silhouette in a premium crafted version. Only 168 of these limited edition Kicks were created in this White/Navy colorway. With Hopefully more colorways to come soon.

I saw these onhypbeast last week and they sure brought back big time memories. The Original shoes launched back in 1976 and when I think about it, that was the start of my interest in Shoes. At the time I remember there were only three things you could wear for Basketball-The J’s, The Pony’s and an ugly pair of plain white Nike’s that had black swooshes on them. Well actually before these three shoes, the years before that you could either have Canvas Colored Converse All-Stars or PF Flyers. My favs were the Bright orange converse hi tops with flourescent light blue laces!!

The Dr. J shoe in the 70’s was the shoe that ushered in the REAL start to the original “Sneakerhead”. When I saw the re issue, I thought “cool” I gotta get a pair, but they are very limited and I actually want to wait to get the star chevron logo’d shoes in the plain greyish color, so I can color them in with a sharpie just like we did back in the day.

My favorite Player on Northwestern’s Basketball team-Billy McKinney added purple to his star logo and by the end of the game his shoes were practically all purple, it was pretty fun to watch. But what it really did is ushered in the first custom kicks. We all copied him and made our own customs by coloring in the logo’s with Orange, Purple, Blue, and red. And the best place to buy them was from Tony Brown on the “After Hours” market over at they YMCA-He’d hook you up for mere $25 bucks.

As I mentioned, the new re issue of the J’s only came out with 168 pairs, but look who was wearing a pair on tonight’s Entourage-Vinnie Chase has them on as he walks into Ari’s office. It’s usually Turtle with the HOT kicks, but tonight Vinnie blew him away withe the OG J’s. 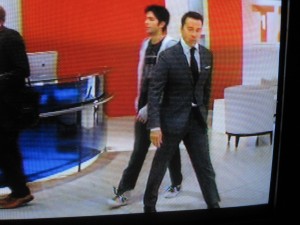 Hey-did you see the show tonight? I told you a few weeks back that Ari would hook up with Dana Gordan and look what happened tonight! Although I didn’t much like the end of the show though, a little too intense..sheez the guy blew his own head off..WTF!