Triple Five Soul, 555 Soul or as I best remember their name: Triple 5 Soul was not just a Streetwear brand but a whole urban lifestyle collab of DJ’s, Graffiti artists, Musicians, Skaters, & Break dancers. In the 90’s, Triple 5 Soul was one of the biggest and most successful Streewear brands around. 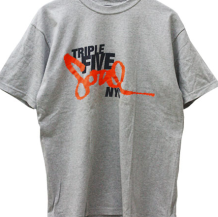 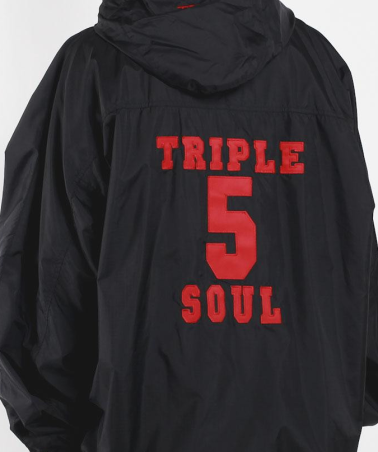 Fun Fact:  The 555 Soul name comes from a then Popular telephone party line advertised and utilized in NYC. Most likely at 3 or 4am after a festive night of partying.

in 1989, Triple 5 Soul founder-Camella Ehike worked out of 151 Ludlow St. on the lower East Side of Manhattan. Ehike had a store front apartment with a sewing machine in the front and living area in the back. Like many creative’s she started making clothes she liked to wear for herself and her good friends. Between 1989 and 1996, Camella lived in her store and sewed everything. Her friends were very influential in the NYC Hip-Hop Scene and the clothes were so dope, the brand took off and demand became higher than supply.

Fun Fact: 555 Soul’s love beads were worn by early rap/house artists; The Jungle Brothers and Boogie Down Productions. BTW: Back in the day, this was 1 of the only House records we had out in Hawaii. I used to play it over and over and over on my record player at parties at my first condo in Waikiki. circa 1988-89.

Fun Fact: Fab 5 Freddy wore a Triple 5 Soul Tie Hat on MTV, which skyrocketed exposure of the store and sales. Here’s a couple of pix of Fab 5 Freddy as host of Yo! MTV Raps. With Tupac and Madonna.

Fun Fact: Mos Def was a friend of Ehike and the face of T5S’s first advertising campaign.

Fun Fact:  Whenever Long Island’s Me Myself and I, De La Soul came to Manhattan they would stop by the shop and ask for some new clothes. Here they are performing their massive hit.

Triple 5 Soul later moved to 290 Lafayette Street, It was here that I would visit most Decembers.

Fun Fact:  Banksky took over the front interior of the store. It was the 1st time anyone brought Banksky to NY. Now (2015/16) you can walk down many downtown streets and see his work everywhere. Especially in the area where the infamous Cronuts exist. I know I was there in Dec 2013 amazed at how much art he had put up around Dominique Ansel’s Bakery at 189 Spring St. Maybe Banksky knew how hard it was/is to get a taste of the elusive delicacies, at least you could check out some interesting Street Art. Note: There’s also a fun looking basketball court next door to the Cronut Store. The day I was visiting the hood, there was even a comp B-Ball to borrow. 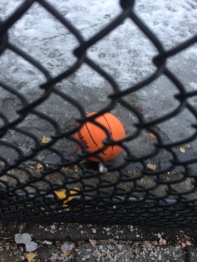 Nearby Basketball Court with Free Ball

Triple Five Soul is known for:

My Fun Fact:  The Triple 5 Soul clothes were pretty pricey when I would visit NY, thus I owned ONE short-sleeved would be vintage now; grey T-shirt with Orange & Blue lettering. It had 3 hands on it doing some sort of sign language. I would wear it on the airplane from NY to Chicago at Christmas time.  And whenever I wanted to feel like I was in the know about Streetwear in the 90’s.  I remember it being very comfortable and quality made. Was one of my favorite shirts for about 4-5 years. And of course it was a Double XL-The Style of the time.

You can still find Triple 5 Soul on this website.  But the most sought after items are the OG items from the 90’s. *Note: Looks like prices are the same or even less nowadays on their site. Kinda’ Wierd.