Just Don’t Do It

These Kicks are Just not Right!

You Won’t see me Rockin’ these..EVER!

This is probably the first pair of Air Jordan’s I would not wear even if they were FREE! What’s going on here? The shoe on the left is in the Phoenix Suns colorway and the Pair on the Right is in the Seattle Supersonics colorway.  The title of this release is the “Formidable Foes Pack”, meaning two teams that played the Bulls in the Play-Offs.

Me, being a Jordan Fan and a Bulls fan there is now way I would want to wear these. Who Would? Would you? And if they made these, where are the HATED Detroit Pistons colorway. That was the Bulls most “Formidable Foe” & the hardest to get past to get to the Bulls goals foe..fer sure.

Although, full disclosure on my end, I would Rock the Jordan 11 “Knicks” Colorway, but they are pretty expensive. My favorite colors are Orange and Blue together and the best place to watch a B-Ball Game int he entire world is Mad Square Garden. But Suns and Supersonics..I don’t think so.  I wonder who is going to buy these? Not Bulls fans, and I bet the Sonics and Suns fans still dislike Mr. Air Jordan for messing up all their hopes and dreams. So, I don’t see them wearing them either.

Pretty strange colorways. At least for me.

And These Kicks are Alright!

On another Jordan note, check these all Red Air Jordan 3’s that JT has been rockin’ during the Legends of Summer Tour! According to Hip Hop wired he wears them and also gives them away at shows.  That’s some major JUICE to have your own pair of kicks that you wear & giveaway to fans. I don’t even think you can buy em’ anywhere but Ebay. Now these are HOT! 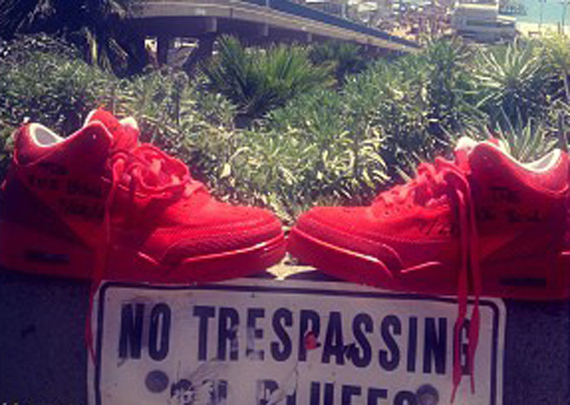 What do you think of these releases?  What are you wearing this Weekend? Me-I’m busting out my brand new All Patent leather luxe Black/Red McQueen’s. See you on the Streets of HI this weekend.