This exhibition features over 100 designs and takes you from the late 70’s thru 2013, showing Punks impact on High Fashion and Haute Couture. There are Seven galleries, 3 take you  from London to  New York and include Clothes for Heroes. The other  4 areas are  DIY themes including: Hardware, Bricolage, Graffiti/Agitprop & Destroy. This looks like so much fun it may render a trip to NYC this Summer to check it out.  You can also see a video on their site that explains the exhibit more in detail. Or you can check out some of the gallery views here. 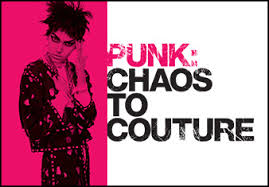 You still have lots of time to check out this fabulous Fashion Exhibition. It features over 85 designs from the vibrant, bold & extremely influential 1980’s  with clothes from John Galliano,Vivienne Westwood & Workers for Freedom amongst others. Celebrating New Wave, New Romantic and High Camp.  I bet there will be plenty of Neon and I suspect the clothes will look a bit like reading an 80’s version of i-D and The Face magazines. If I were them I would sell “FRANKIE SAYS RELAX” shirts in the gift shops.  I remember I had my own DIY shirt like this, it was an oversized white shirt that I wrote on with a big black magic marker. Here’s a picture of Mary Kate in her newer version of the shirt:

One of the outfits that is confirmed to be at this exhibition was that of Adam Ant. AA is actually coming to Hawaii September 14 for a concert at the Republik, I wouldn’t mind seeing and hearing “Stand and Deliver” here in my hometown.  Better late than never.

BTW:The 2013 CFDA Menswear Designer of the Year Award was presented to Thom Browne