The Black Cat is out of the Bag! 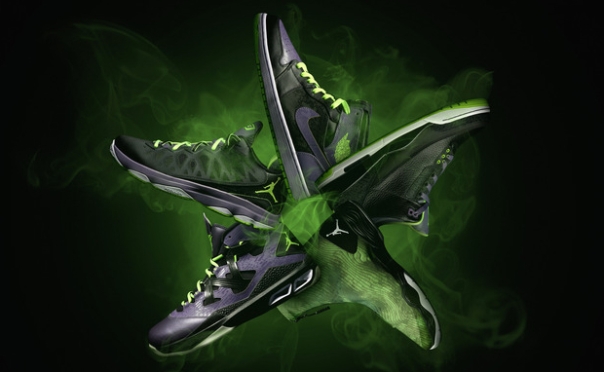 Jordan Brand will release a 5 Sneaker collection featuring the Black/Electric Green(Flo Green) colorway. They will be known as the “Stealth” All-Star Collection and will include the Air Jordan 1, Air Jordan 111, Jordan CP3, Jordan Melo M9 and the all new Air Jordan XX8.

Thursday February 14, 2013: Will see the release of the Jordan Melo M9 and the Jordan Cp3. Both include the special UV ink that illuminates when seen under Black Light.

Saturday February 16, 2013: Will be the BIG day with the release of THREE Jordan night vision inspired Kicks. I suspect the Biggest and most sought after will be the Jordan 1 Retro Mid and the Jordan 111 both in Black/Electric Green. Also releasing on the same day will be the Air Jordan XX8. I’m so glad that they went back to labeling the Jordans by numbers. I remember complaining about the last few pairs and how they didn’t have a number. It’s so silly but Because of that I didn’t even buy a pair. Last Jordans other than Retro’s I bought were the 23’s.

I really dislike saying “Good Luck finding the 1’s and 3’s” and dislike saying even more that “I don’t know where these will be sold in Hawaii” The best help I can provide is to check out Premium Laces in NYC at 68 Spring Street or call up Eddie or Matthew at 212-334-4934. That store can either hook you up or let you know where to go to get a pair. Make sure you tell them that Streetzblog.com says “Aloha”. I’m sure that Footlocker at Ala Moana in HI will have the AJ28’s and sometimes they get the retro’s, but not always on the same day of release as the mainland.