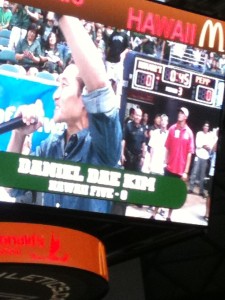 Daniel Day Kim welcomes the crowd to the UH vs Pepperdine Volleyball game in Hawai.

Tonight I went over to the UH vs Pepperdine Womens Volleyball game to get on to Hawaii Five-0 and have fun with some friends. It was a little early for me to go out on a Saturday night, so I forgot my real camera-sorry for the iPhone shots and I barely made it in. My friend with all the tix gave them all away because he knows i have trouble getting out of the house at 630p on a Saturday night.

It was weird there were no scalpers out tonight, but we thought positive and low and behold, my friend Gene said this family coming down the escalator will have some tix. He Asked them and they gave me two!  Thank You so much to whoever you are, that was very nice of you.

So I went in to watch the games.  The crowd was jammed packed with close to 10,000 people there!  A total Sell Out! And UH won the 3 games, thus they won the match.  After the game was over, They started the filming for Hawaii Five-0, We watched a fake UH team and a Fake Rio Del Rancho Team play a bit then do a big spike and after that we went WILD and hopefully got on TV.  We did this about 8 or 9 times. 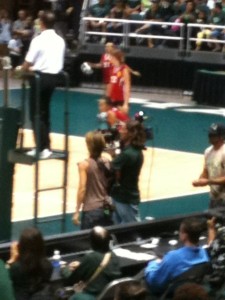 They threw out a few special edition Hawaii Five-O shirts to the crowd and did lucky tickets to win 9 Volleyballs signed by the 4 principal actors of Hawaii Five-0.  It was a fun night, although there weren’t any action scenes with guns and things blowing up. Just the pretend Volleyball game. But What a great way to spend a Saturday night.  And this kind of thing could only happen here in Hawaii, thus lucky I’m here this month.

Fashions at the game: Well not much going on, everyone was told to wear a green shirt with an H on it.So lots of green shirts with H’s on them, a few UH football jerseys, a couple of people in sea green sweaters, a pretty nice flo green lettering on green shirt and a bunch of people in pink who just plainly didn’t know where they were or didn’t get the memo to wear green.

Me, I went with the herds on this one, green shirt with an H that my friend Shannon gave to me yesterday just for the Occasion. And I had on my one of my most comfortable pair of Jordans. The Green, silver, red, Blue Nurse Sharks.

Oh Yeah, one more thing, when I left the Arena, I spocked my car with some sort of silver spray paint or opaque paint marker on it.  It is pretty Street, but also kind of lame.  I guess you would call it vandalism?  Not sure, never had this happen to me before.  I told the cop lady, she said she was watching some other floor during the game, then she took a picture of it and a picture of my licence plate. Then I went home. Here’s a picture of some street art from Hawaii?  Looks a bit more like NYC stuff, but I don’t really get the purpose of it.  It doesn’t even have a tag in it or any design element other than dribbles.  Bed time now, I gotta wake up early Sunday for a 7 hour photoshopclass-wish me luck. Watch for me on TV on the Hawaii Five-0 TV show! Cheers and Aloha!

Say What! is this anyways.