As some song says:  “A lil’ Bit of this and a Lil’ bit of that” is what we have for you today.

SBSB-Hawaii Five-O Alert:  Today, I received an email asking if I had any tickets to this Saturday’s U.H Women’s Volleyball game from 3 different people, usually I don’t get asked that by 3 people in a week, let alone in one day. So, I asked around and heard a buzz about Hawaii Five-0 and how they would be filming at the game this Saturday.  Seems the Rumours of the day are confirmed.  This is directly from the Star-Advertiser.com site:
“The University of Hawaii is asking fans to come to next Saturday’s match against Pepperdine and stick around after to help film an upcoming Hawaii 5-0 episode. The match starts at 7 p.m. and some 5,000 tickets are available. UH is asking fans to wear green “H” logo shirts”.

Sounds like fun, but I don’t have any tickets, I gave them all out last week.  And do 5,000 people really have green shirts with H’s on them, maybe UH, but H?  eh?  I see a promotion here!  If I was a local company in town, I’d print up a ton of green T’s with H’s on the front and put my logo on the back, then tell everyone they can have one if they spend $25 bucks or more at my store this week. (I’d actually sneak my company’s logo somewhere on the front, but that would probably piss off Hawaii Five-0 and I sure wouldn’t want to do that, I still want to get on the show one day!

SBSB-Celeb Alert:  Spotted earlier today in Kalihi at a school.  Arnold “The Terminator” Shwartzenager (sp) and Tia Carrere.  Rumor is he and Tia will also stop by two more schools this week.  They are on a mission to say no to drugs, gangs and getting Drunk and Saying yes to homework, sports and Life. Hmmm.  Note: Tia Was also spotted at the Hawaii Five-0 Premiere this past Saturday at Sunset on the Beach in Waikiki. And on the Celeb spotting scene:  Wayne Brady was at the Wanda Sykes show Saturday night at the Blaisdell.

And last but for sure not least SBSB-Shoe Alert: It seems Spike Lee has finally made some Spizikes in a colorway that makes sense and looks really good!  He has finally produced the Knicks Colorway in both Orange and Blue.  And the Blue is set to go on sale to the general public.  I dont know the exact date on the blues, but do hear that they will be available.  I dont know at the moment if the orange colorway will go on sale, but as we can see by this picture they do exist. 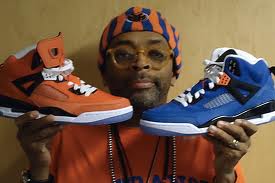 Do the Bright Thing!

So far, I’ve resisted getting a pair of Spizikes, mainly because they are usually too expensive at $175 on the racks and usually more on pickyourshoes.com. And because I’ve only once seen a colorway I enjoyed. But now, OMG! These are Sweet!  My favorite colors are blue and orange and Yeah, I’m a Bulls Fan, but  living in Hawaii most of the year, I can cheer for whoever I want, thus, I am also a Lakers and Knicks Fan.  And the Knicks are the only team that I see in person every year at least once.  Thus, its ok if I like the Knicks and the Knicks colors.  And hopefully, Carmello will get his swag back this year and the Knicks will actually play well for once in like 10 years or so.  I’ll keep you posted on when these go on sale. With no NBA season solidified right now, it would be a good time for these to come out, so NIKE can make some money-just think how much money they would lose without an NBA season.  I noticed that tickets for Hockey went on sale last week and Hockey and Basketball usually start at about he same time of the year, so “Hey-Where’s the NBA, and why isn’t anyone talking about it”  maybe it’s because I live out in Hawaii, but no one is missing the NBA out here except me right now.  That’s just plain wrong!  They better be playing when I hit NYC in December or I won’t be rockin’ these or any new B-Ball shoes this year!  That will be my protest!  Yeah!

The Blue ones that the internet does say will go on sale.

More detail on the Knicks Colorway courtesy of marqueesole.com